Distribution of microorganisms in tablets

Wasa medicals produce ProBion tablets containing lactic acid bacteria. A new formula for the matrix of the tablet has been tested, which makes it possible to use a lower pressure in the production. It has been shown that with this new technique, the amount of surviving bacteria is very high, when cultivating the bacteria. On a comparison with a reference tablet where a higher pressure had to be used in the production, there was a big difference in the amount of surviving bacteria.

The goal of this study is to compare the bacteria content in the Probion with the bacteria of the reference tablet. It is of interest to see if different pressures in the production process have an effect on the bacteria. Light microscopy and scanning electron microscopy have been used to carry out the investigation.

PLANNING AND IMPLEMENTATION OF THE PROJECT

Two different tablets were included in the study:

The tablets have been produced using different formulas and different pressures. A comparison between the two tablets was made with respect to the overall structure and to the distribution and appearance of the bacteria. Light Microscopy (LM), Confocal Laser Scanning Microscopy (CLSM) and Scanning Electron Microscopy (SEM) were used in the study.PREPARATION FOR LIGHT MICROSCOPY

The tablets were crushed and dissolved in 0.9% NaCl, 1 tablet per 5 ml solution, for ca. 2 h during constant steering. The solution of Probion was somewhat turbid. The bacteria were stained with acridine orange, 0.1% in 0.9% NaCl for 1 min. The surplus of staining solution was blotted with a filterpaper and the specimen was covered with a coverslip. The specimen was investigated under the LM using fluorescence mood.PREPARATION FOR CONFOCAL LASER SCANNING MICROSCOPY

Pieces of the tablets were stained with acridine orange for 1 min and mounted in the cavity of a special microscope slide. The solution penetrated into the tablets and the bacteria were stained. Even the material building up the tablet was stained, especially in the reference tablet.PREPARATION FOR SCANNING ELECTRON MICROSCOPY

The tablets were fractured and mounted on SEM stubs using conductive glue. The surface was coated with gold.
RESULTS
LIGHT MICROSCOPY

After dissolving the tablet and staining the bacteria with acridine orange, the bacteria were easily found in the Probion tablet. Cocci as well as bacilli were found and they seemed to be well preserved, figure 1. 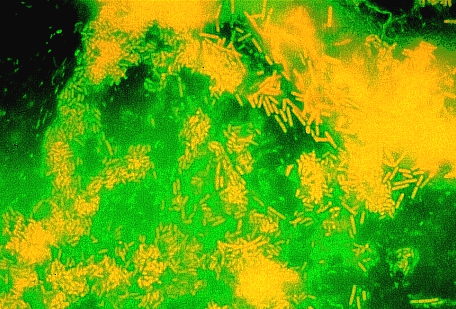 The CLSM study showed that the fracture surface of the two tablets differed substantially. The Probion tablets, shown in figure 3, have a smooth continuous surface (yellow-brownish) where the bacteria (brighter) can be seen rather evenly distributed, see arrowheads in figure 3. The reference tablets seem to consist of fibre like fragments, which make the surface look very rough and discontinuous, figure 4. Acridine orange heavily stains the fragments and therefor they show strong fluorescence. The bacteria are not visible at this magnification, but at higher magnifications it can be seen that clusters of bacteria often stick to the surface of the fragments.

The fact that it is easier to distinguish single bacteria in the Probion tablet than in the reference is obvious when comparing the clusters shown in figure 5a-b and figure 6a-b. In figure 5a-b (Probion) it is possible to see the shape of single bacteria and it can be noticed that most of them seem to be bacilli cells. In figure 6a-b (reference) the cells are clogged together and it is difficult to identify single cells. The size of the cells is smaller and they look more like spots, which indicates that they are mainly cocci cells. It is known from the literature that the cocci have a better ability to survive than bacilli. It is obvious from figure 6a that the bacteria grow on the surface of a fibre fragment.

Bacteria in the reference tablet

The micrographs shown in figure 7a-b are from a Probion tablet. The dominating structure of this tablet is built up by spherical particles that often contain bacteria. It can be imagined that the cells are well protected in these cavities. Figure 7a-b show the same area at two different focal depths deep inside the tablet, which explains the poor resolution of the micrographs. Figure 8 shows the “cellike” structure of the Probion tablet and that bacteria are also found in the walls between the cavities. Figure 9 shows a cavity containing bacteria at a higher magnification. It can be noticed that most of the organisms are bacilli.

Examples of the bacteria content in the reference tablet are shown in figure 10a-b. Here the cells are not well protected in cavities, but very often attached to the surface of the fibre like structures building up the matrix of the tablet (see 10a). This makes the cells more exposed to pressure and other outer conditions.

Bacteria in the reference tablet

All micrographs shown in this SEM presentation are from fractured surfaces coated with gold. The micrographs will be found after the conclusions in this report.

The SEM study confirms the findings from the CLSM study. The Probion tablet is mainly built up by spherical, smooth structures, figure 13a-b. Some of the round structures have cracked due to the energy of the electron beam. This indicates that the spheres have a shellike structure. In the CLSM study it was noticed that the bacteria could hide inside cavities, figure 7a-b. These round formations seen in the SEM probably correspond to the cavities in CLSM and therefor they might contain bacteria.

Even the structure of the reference tablet bears a strong resemblance to the structures seen in the CLSM micrographs. Stiff, sometimes sharp, fibre like formations build up the matrix of the tablet, figures 14a-b. The sharpness might have a negative influence on the bacteria when exposed to high pressure.

In both the Probion and the reference tablets it was difficult to find areas where the bacteria could be clearly seen in the SEM. Figure 15a shows a cluster of bacteria in Probion. It can be noticed that most of the bacteria shown in this micrograph are bacilli, probably bifidobacteria. Figure 15b shows the bacteria at a higher magnification.

Bacteria from the reference tablet are shown in figure 16. Here it can be seen that most of the cells are streptococci. It can also be noticed that some of the cells are deformed and have lost their spherical shape. There are also some sharp fibre fragments, that can be suspected of punching and damaging the bacteria during the pressing process.

More information about the condition of the bacteria could be obtained by an examination under the Transmission Electron Microscope. The advantage of this technique is that a higher magnification can be reached and thereby more detailed information can be obtained.

We welcome all shoppers and deliver worldwide, but information on this site it's not intended as medical advice and is for healthcare professionals and consumers outside EU. Responsibility for patient care resides with the healthcare professional. For more information visit probion.eu.
This website uses cookies to improve your experience. We'll assume you're ok with this, but you can opt-out if you wish. Cookie settingsACCEPT
Privacy & Cookies Policy

This website uses cookies to improve your experience while you navigate through the website. Out of these cookies, the cookies that are categorized as necessary are stored on your browser as they are essential for the working of basic functionalities of the website. We also use third-party cookies that help us analyze and understand how you use this website. These cookies will be stored in your browser only with your consent. You also have the option to opt-out of these cookies. But opting out of some of these cookies may have an effect on your browsing experience.
Necessary Always Enabled
Necessary cookies are absolutely essential for the website to function properly. This category only includes cookies that ensures basic functionalities and security features of the website. These cookies do not store any personal information.
Non-necessary
Any cookies that may not be particularly necessary for the website to function and is used specifically to collect user personal data via analytics, ads, other embedded contents are termed as non-necessary cookies. It is mandatory to procure user consent prior to running these cookies on your website.
SAVE & ACCEPT